As malware and its different variants have been exponentially increasing during the past few  years, it is very important for our customers and Incident Response team members to keep learning new vectors and techniques used by hackers to avoid security controls and achieve their goal. That is why I present to you an adopted Malware Dynamic Analysis methodology based on standards and international methodologies such as:

The result of carefully studying those methodologies has produced an outcome of its own methodology that is adaptable to the environment in which it is implemented. Here are some phases and steps, but not limited to this methodology:

The objective of this methodology is to present to readers the importance of having a malware laboratory that will help to understand the way malware works and its behavior when it is exploited into an isolated victim machine so the Incident Response team member can provide a better contingency plan. The mitigation step depends on having sufficient knowledge about the root cause and impact of the threat as well as the knowledge and skills to do something about it. It is a time-sensitive step where security practitioners will benefit greatly by having an integrated and centralized malware laboratory to view all threat-related activities, as well as streamlined cross-organizational collaboration capabilities, knowledge bases, and automated responses, and understands how the malware works and its impact on an infected host.

I propose to implement a malware laboratory into a production environment and describe its benefits and how a good dynamic malware analysis will help understand how a malware infects a machine and its effectiveness. It doesn´t try to change or modify any methodology or policy implemented to handle an Incident Response alert, otherwise, it will be offering security intelligence into the detection and response life cycle.

The malware laboratory is being composed of two virtual machines hosted on one physical server or in a physical laptop orchestrated by a hypervisor.

One virtual machine works as the target computer and the second machine works as a unified platform that can manage, control and analyze the network traffic and events generated by the victim machine. Those computers are going to be composed of the following tools:

Most of these tools are open source and can be used under the GNU license and it doesn't impact the company's budget, giving you a benefit.

Malware is now developed with intelligence techniques capable of detecting if they are or not running on Virtual Machines (SandBoxes) and stop running. This is called Anti-SandBox techniques, just to mention a few of these techniques, they include the possibility to detect:

For this reason, I definitely recommend you harden your Malware Lab, test manually or automatically using public scripts such as Pafish (Paranoid Fish from the author Alberto Ortega), that way you will cheat the malware and it will run in your lab environment.

All these services on the isolating LAN are going to be monitored by the central server and managed with the IPTables firewall. The following image illustrates the infrastructure:

This environment is not limited to only this protocol, as the virtual environment can be escalated to a real environment including: AD servers, Web servers, FTP servers, Virtual switches and different DMZ zones. I leave this part to your imagination and needs. 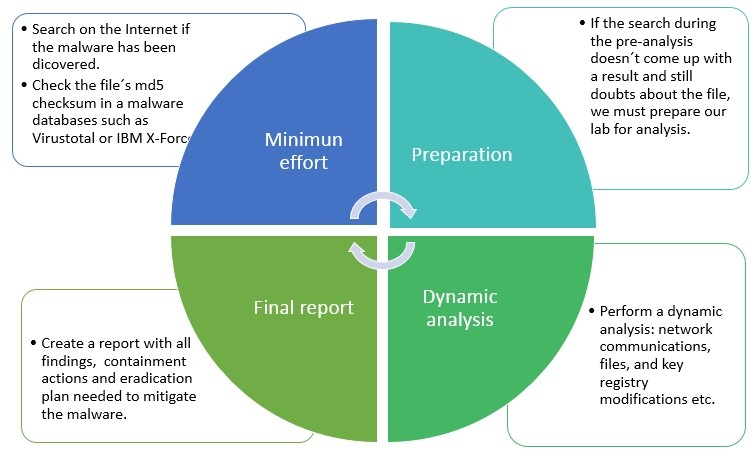