LUKS encryption is widely used in various Linux distributions to protect disks and create encrypted containers. Being a platform-independent, open-source specification, LUKS can be viewed as an exemplary implementation of disk encryption. Offering the choice of multiple encryption algorithms, several modes of encryption and several hash functions to choose from, LUKS is one of the tougher disk encryption systems to break. Learn how to deal with LUKS encryption in Windows and how to break in with distributed password attacks.

When attacking an encrypted container, you must either know the exact combination of the encryption algorithm, the hash function, and the number of hash iterations. Making the wrong choice effectively voids your chance of successful recovery even if you stumble upon the correct password.

LUKS is a platform-independent disk encryption specification originally developed for the Linux OS. LUKS is a de-facto standard for disk encryption in Linux, facilitating compatibility among various Linux distributions and providing secure management of multiple user passwords. Today, LUKS is widely used in nearly every Linux distribution on desktop and laptop computers. It is also a popular encryption format in Network Attached Storage (NAS) devices, particularly those manufactured by QNAP.

Being the only hardware-accelerated encryption algorithm, AES is by far the most common of the three, especially when used in enterprise environments and network attached storage (NAS) devices. AES encryption offers that highest stream cipher performance when used on chip sets featuring AES encryption acceleration (e.g. the AES-NI instruction set in Intel CPUs). Serpent and Twofish can be manually specified by the user at the time of creating the encrypted volume. In our tools, AES, Serpent, and Twofish algorithms are supported.

Various Linux distributions may use different default settings when setting up an encrypted volume. For example, Red Hat Linux employs cbc-essiv:sha256 with a 256-bit AES key, which is the default combination for many popular Linux distributions. Our tools support CBC-PLAIN64, CBC-ESSIV:SHA256, and XTS-PLAIN64 encryption modes.

* The support for WHIRLPOOL is not part of the specification, yet our tools support this hash function along with the four “official” ones. By default, most Linux distros use SHA-256 as a hash function.

A single LUKS volume may be protected with more than one key. The specification allows multiple user keys to decrypt the master key that is used for encryption. As a result, a LUKS-encrypted device may contain multiple key slots, which are used to store backup keys/passphrases and to allow multiple users unlock LUKS volumes each with their own password.

Each key slot is protected with a unique salt, making the reverse brute force attack (matching the same KDF of a password against the different slots) unfeasible. A KDF must be calculated separately for each key slot during the attack. As a result, recovering password to protecting a LUKS device requires selecting a key slot to attack. This selection is performed with Elcomsoft Distributed Password Recovery when setting up the attack.

To secure access to the data stored in the encrypted device, you must first recover the original, plain-text password. There are several steps involved requiring the use of several different tools.

We have two different tools for extracting LUKS encryption metadata. The choice of the right tool depends on whether you are working in the field or in a lab. If you are analyzing the suspect’s computer, Elcomsoft System Recovery can be used to boot the system from a USB flash drive and extract the encryption metadata from the storage devices connected to the computer.

Note: LUKS encryption is supported in Elcomsoft System Recovery 7.06 and newer. If you are using an older version of the tool, please update to the latest version to obtain LUKS support.

Note: LUKS encryption is supported in Elcomsoft Forensic Disk Decryptor 2.13 and newer versions. If you are using an older version of the tool, please update to the latest version to obtain LUKS support.

While LUKS offers strong protection against brute force attacks by using thousands of iterations of a hash function during key derivation, we have significant advances in password recovery attacks compared to what we had in the past. Brute-forcing a password today becomes significantly faster due to the use of GPU acceleration, distributed and cloud computing. Up to 10,000 computers and on-demand cloud instances can be used to attack a single password with Elcomsoft Distributed Password Recovery.

In order to set up the attack, do the following. 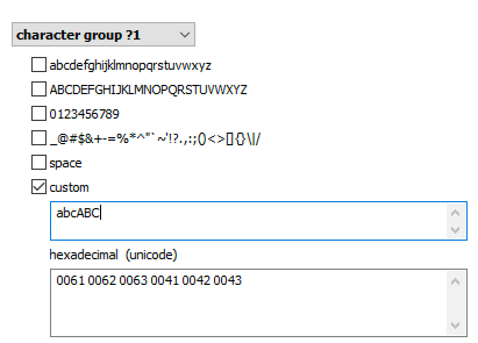 Advanced techniques allow composing passwords with up to two dictionaries and scriptable rules:

How Long Will It Take to Break the Password?

Even if you know exactly how many passwords per second the attack will yield, there are many things affecting the time it will take to recover the LUKS password. The length of the password and its entropy, as well as the things you know about the password or the way the user makes up their passwords, will have drastic effect on the time it will take to break a particular LUKS volume.

What about the recovery speed? The speed is also not a constant, and there are a lot of things affecting the speed of the attack that aren’t immediately obvious. The number of passwords per second you can try depends on several things, the most important being the following:

The hardware. The more/higher end video cards you have, the higher the raw speed you will get. Same goes for the number of computers doing the attack; the more computers are crunching the password, the faster the speed will be.

The encryption algorithm and encryption mode. Once again, these settings are selected at the time the user sets up the encryption. The choice affects the speed of the attack, but to a significantly minor degree compared to the choice of a hash function. 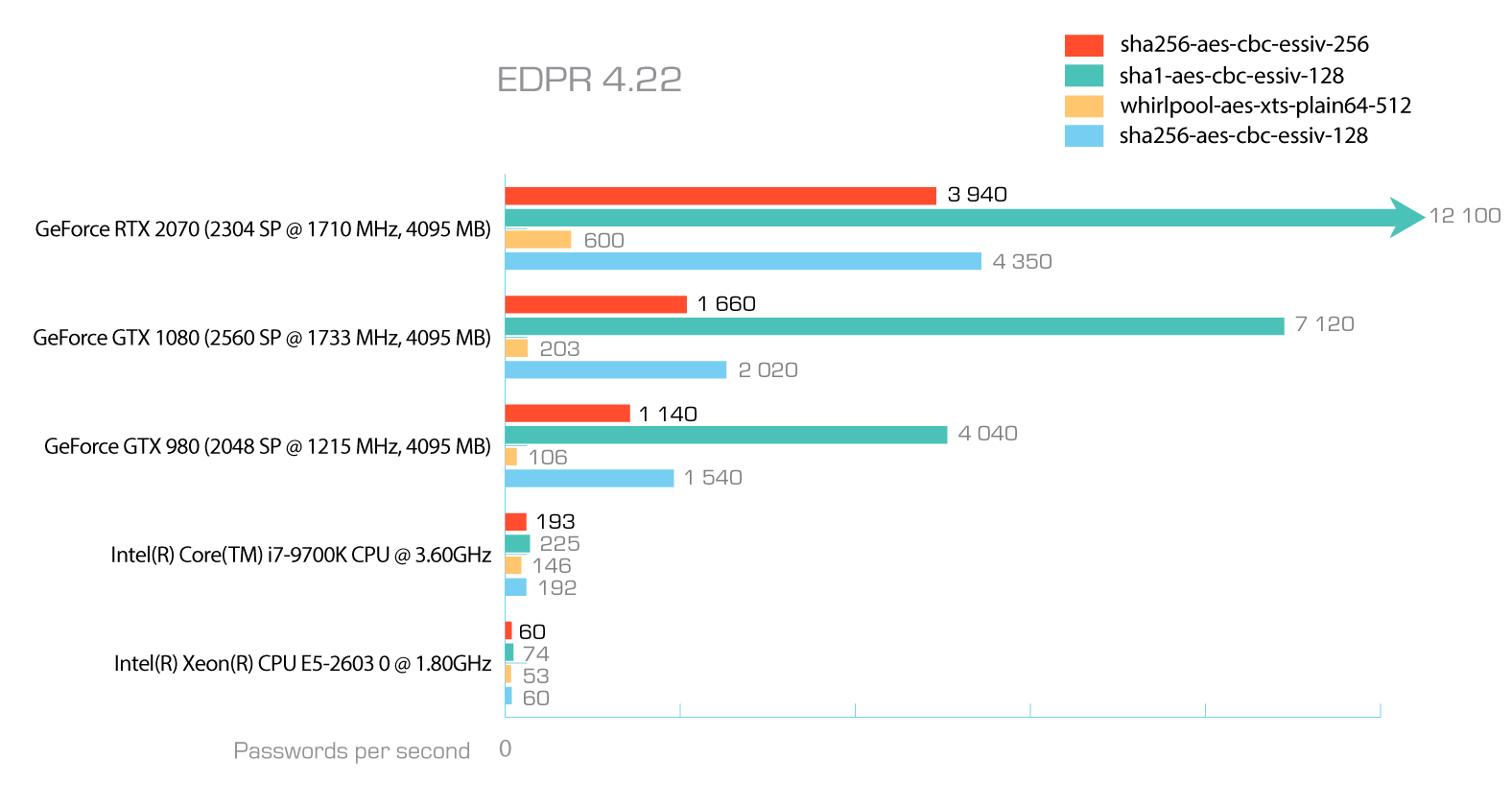 LUKS is not only a popular and widespread encryption specification, it’s also a very interesting one to work with. The support of multiple key slots, the choice of hash functions, encryption algorithms and encryption modes, and the benchmark-based algorithm for automatically selecting the number of hash iterations when setting up encryption based on the performance of the user’s computer make LUKS an exemplary implementation of disk encryption.

This article was originally posted at ElcomSoft blog: https://blog.elcomsoft.com/2020/08/breaking-luks-encryption/